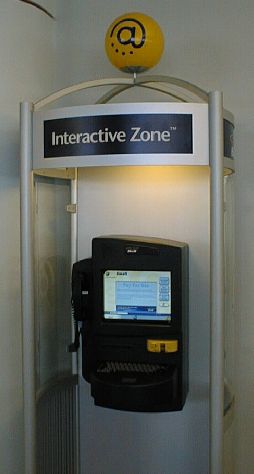 I am still taking this place in, like a lizard drinking, but it is clear that Californians (excepting those who just found themselves here and have not bothered to look around) are about getting the most out of their lives. The Summer of Love did not start here by chance, Silicon Valley could not have grown up without the environment.

Some ingredients are basic: A climate that is not an impediment, for instance, and a reasonable catchment for immigrants. Good education centres. A lack of entrenched, conservative interests, found in California's case by crossing a decent desert to start a new-ish society, originally for gold or whatever. To this brew of ingredients, the yeast of free-thinking, energetic, ambitious doers is added, and away you go.

Here you can step into a phone-style-booth to check your email, but until relatively recently you could not rely on the emergency service telephone number being the same everywhere (even though the phone company was a monopoly). Once upon a time it was good to memorize the number as you entered each town (it was often posted on signs, for obvious reasons). Stuff becomes topsy-turvy in the ferocious fermentation.

I am sure there are buckets of books on the phenomena like Silicon Valley, and plenty of places are trying to recreate the effect. This is not the point I want to make. I want to observe that the effect is waning. The brew is slowing down. Dead wood accumulating, perhaps. There are people of apalling ordinariness, who just happened to be here rather than travelling to here to get in on the action, and they are taking up space. (I will not mention anyone I have in mind just here.) Perhaps also a gleaming, magnanimous, socialism born of the sense of security and general over-confidence is sapping too much energy. It is beautiful stuff if you can afford it... the medical and education systems of Australia in the 1970s and 80s where superb, while it lasted.

I work up to asking the question: Why are you wherever you are? Is one place better than another to live and work? If there is a better place than where you are, why don't you get up off your spotty behind and go there?

One extra factor: It is often better for you to be where you are, if not for another person, because you have friends there. I would not have thought of leaving Oz a decade ago, because it was not so bad a place and I have (I like to think) an awful lot of damn good friends... stuff that is not easily replaced. What changed things was the economy (sad), the attitude of the government (anti-over-educational yet socialist), and the internet (which adds a new level of practicality to staying in touch).

Kay and I would like to think Oz will become the best place to be, and for us it may well do so one day. I imagine that somewhere in Europe will take over from California as the best spot, all impersonal factors being the same. Any way it falls, Merinda, being tripassportal, is set to be in the first category.

I wish I could take credit for the title, but it came via a local DJ (from a Chilli-Pepper song?).