I look all bright and breezy this morning as we have breakfast at The Oasis. Not so happy last night... Alice got sent home. We crashed the Typhoon into a fencepost next to Moss and Betty's place, because I was talking to Alice instead of looking where I was going. Oops. I broke the post off and bent it so well that Daddy could not budge it even with a sledge hammer. He spent the morning fixing the post, or making it look not broken anyway.

Daddy was right, I was being a bit too cocky and full of myself, and I don't think barging into his office or going through his bedroom to the attic without asking, or taking the typhoon from Mum without asking were cool moves either.

It's actually a bit lucky, Moss did not mind either, mainly because he sold his place last week. Did you know that Mystery Creek Wines bought the place next door to turn it into a vineyard? We will have 10 acres of grape vines growing next door, so cool! Not only that, but the chef of The Woodbox, the best restaurant in Hamilton according to Mummy, is going to live next door, and they have a 9 year old girl in the family. I'm 9.45, and a girl, just perfect. Thelma and Louise look out! 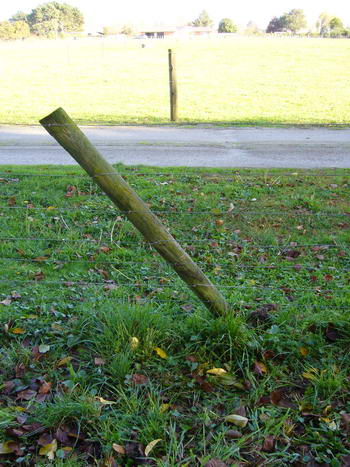